The 1910, Mapping Sculpture records in The Eighty-Fourth autumn Exhibition of the Royal Birmingham Society of Arts a work entitled ‘Father’s Hope Mother’s Joy’. (1) 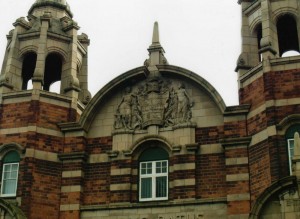 Creswick was commissioned to provide another Birmingham Coat of Arms for the Public Baths, Nechells Park Road, Nechells.  This is described in Public Sculpture (2) as being in Buff Terra cotta. However, from the illustration it is certainly questionable whether that is the material, which looks much more like the stone of which the building is constructed.  The text mentions the fact that Creswick modelled the coat of arms earlier in the year. Possibly there was a sketch model in terra cotta, but the final piece was carved in stone.  The work itself shows the two supporters with Creswick’s characteristic stalwart male figure amidst the tools of industry, the classically draped Female figure of Art, has a bust of Minerva, goddess of crafts and Wisdom by her feet.  Creswick wreaths the central shield with two branches of bay laurel – the symbol of Victory. This is a reference to the success of Birmingham’s industry and commerce. They frame the shield and lead the eye up to the mural crown of the facade.

1913 was the year of the Centenary Exhibition of the Royal Birmingham Society of Arts and Creswick is listed as having ‘multiple exhibits’ Mapping Sculpture (3). 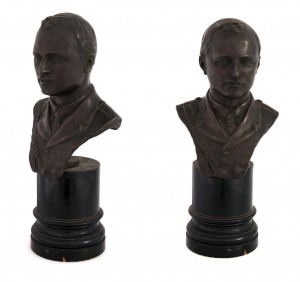 There are fewer works recorded in this period, however Creswick does not come to a complete halt.  In 1916, he was elected as a professional Associate Member of the Royal Birmingham Society of Arts. He is first listed as a Full Member in the spring catalogue and then listed in the exhibition catalogues as ‘Professor of Sculpture’ from 1894 until 1926, Mapping Sculpture.(4)  There is, in the Sheffield Museum’s collection, a bronze bust of a Sheffield Officer [left]. Although signed and dated 1916 by Creswick there is no clue to the identity of the officer.(5)

Creswick remembered those who had helped him in his early days. In 1901, he attended the funeral of his early 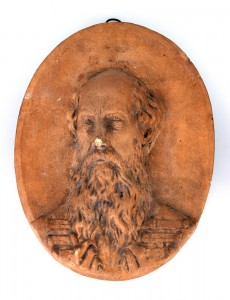 mentor Col. H.D. Lomas, who was described in his obituary as

‘Loved and esteemed by all who knew him, including the officers and men of the Volunteers, and by his students, for his gentle nature and nobility of spirit’ (6).

There is a medallion portrait in the Sheffield Museum’s collection which is undated but possibly a memorial portrait [Pictured left]. It is of an elderly gentleman who is portrayed as older than the Lomas who helped Creswick in his early days in Sheffield    The unnamed officer could also have been an earlier acquaintance of Creswick’s – someone who perhaps had died in the 1914-18 war. This is another question for further research.

‘The First World War effectively put an end to Creswick’s commissions, and by its end he was verging on retirement from teaching which came in 1920.  Two of his sons Charles and Jack had gone to Edinburgh to work on a complex bronze founding commission for the Marquis of Bute which was to last for ten years’. (7)

As there was no foundry in Scotland sizeable enough to take on this large project, Creswick’s sons had to set up in business, forming the firm of McDonald and Creswick.

However Creswick did not altogether give up his work. In 1920, he sculpted another poignant war memorial, this time in memory of the members of the Boldmere Swimming Club who had fallen in the 1914-18 war.  It was presented to the borough in 1921 and stood in Sutton Park.  The memorial is unusual in that it is of a youth teaching a boy to swim. As in Creswick’s Huddersfield sculpture, the subject seems preoccupied – the boy preparing to dive with the seated youth watching his stance.  They portray what is lost; the flower of youth and 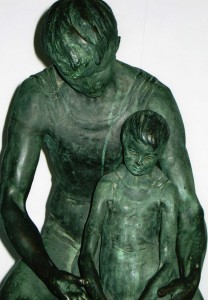 those unborn generations that would never be. The sculpture is a touching tribute to the sacrifices that were made in WWl.  The memorial has been moved to the foyer of the new swimming baths in Wyndlay Lane, Sutton Coldfield.  Detailed and illustrated in Public Sculpture of Birmingham  (8) it is pointed out that Creswick was helped by his sons and that the sculpture was cast in their studio at Jockey Rd in Sutton Coldfield.  Presumably the reference to his sons was to Charles and John who were soon to go to Edinburgh and probably William who is recorded as following in Benjamin’s footsteps.(9)

In 1922, Creswick was asked by the Worshipful Company of Cutlers to design another frieze .

The commission was for a sculpture that would be placed on the facade of the building above the original frieze. There exists a maquette (a sketch in plaster) which Creswick signed and dated 1922 [Below left, used with permisson of the Worshipful Company of Cutlers. Click on image to enlarge].  The design of the central band was to depict the ivory and horn trade with a central blank panel which was to bear the arms of the Worshipful Company. There were scenes of traders inspecting ivory and horns of all kinds being collected in large and small consignments and the purchasing and inspecting of the ‘goods’. The design involved two narrow bands: the upper one depicting all sorts of birds and animals which would have been hunted at those times with trees; the lower band depicting scenes of hunters and the boars whose tusks were also used in the making of handles for the cutlery trade. The maquette is mentioned in Public Sculpture, (10) where the central panel of the maquette is described as being modelled in the flat style favoured by sculptors such as Gilbert Bayes and Hermon Cawthra, who worked in the inter-war periods. Creswick retained his own style throughout the remainder of the bands, which have the blend of foliage and lively creatures and the men, horses and dogs so much enjoyed by Creswick. The frieze is described as Art Nouveau but the foliage seems too sturdy and real – too Ruskinian in character -to be truly Art Nouveau. That said, it is perhaps less ‘naturalistically represented’ than in Creswick’s previous works.  This work is lively and instructive. It shows figures engaged in trade haggling and hauling loads. The working lives of real people and creatures are depicted in their natural surroundings. There is no diminution of Creswick’s sculptural skills or interest in different subject matter.  Ultimately, the frieze was not commissioned and, unfortunately, there is no record of the reason for this.  The Cutler’s Company Minutes have a record on February 22nd 1922 of Creswick having requested,

‘some remuneration in connection with the preparations of the Design for the fascia at the front of the hall’.

Creswick’s final work was a series of panels portraying The Passion, which is at present resides in the Catholic Church of Our Lady and St Brigid in the Parish of Northfield, Birmingham.  Ogden reports that it was not originally intended for this church. Thus far, it has not been possible to access the records.  The panels are individually signed and dated, with dates that range from 1920 through to 1929. By far the majority of the panels were dated 1929. Although they have such a wide range of dates, the panels retain a cohesive style throughout.   There are existing photographs of the work, however no record or evaluation has been made and permission has not yet been obtained for the use of the images. This work is part of ongoing research and will be added to the website as soon as possible.

Creswick is not known to have done any later work than this.  However it is known that he had a long and happy retirement. Research has unearthed an article which may have come from a Sutton Coldfield local paper and may date from 1933. The article has the by-line ‘Suttonian’ (12).

‘Very warm congratulations have been extended to Mr Benjamin Creswick, of Jockey Road, upon his attainment, on Sunday, of his 80th birthday.  Mr Creswick has for a long time resided in Sutton Coldfield, and at one time he had charge of the art classes at the art school.  For most of his life he was on the staff of the Birmingham School of Art, to which he came on the recommendation of John Ruskin, where he had direction of modelling and sculpture work.  He is an artist of considerable distinction, and several of his statues are to be found in various parts of the world including the Far East.  The beautiful figure of a swimmer – The Boldmere Swimming Club war memorial near the Boldmere entrance to the Park is an example of his work.

‘The Boldmere Conservative Club have sent their most respected veteran member a letter wishing him continued health and physical vigour so that he may  enjoy for many years to come the outdoor sports of which he is so fond.  He still rides his cycle, he can play a good game of golf, he is an expert angler, and can give most men a few points at billiards or snooker.’

There is a particular pleasure in reading this when it is considered how precarious his life expectancy was at the age of twenty or so.  Creswick’s life and work are testament to Ruskin’s enduring legacy and of his teaching so long held dear in Creswick’s heart.

Benjamin Creswick lived on until 1946, enjoying a happy retirement. In addition to Sir Frank Brangwyn’s tribute, there is a touching letter written in 1959 by one of his daughters, Mrs Edith Clews, (13) who wrote:

‘He lived with me until his death at Elmwood Studios, Jockey Road, at the age of 93.  A most wonderful father, a great sculptor, an unending ability to design…’ 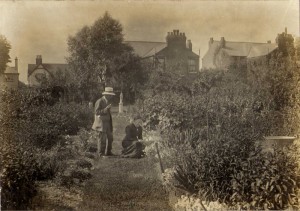 (5) The Museum in Sheffield has no information on the provenance of this bust and other than the signature and date on it. There is apart from the uniform details no means of tracing the officer’s identity, however it is a research project for the future.

(12) ‘Suttonian’ article is in the Charles Creswick archive