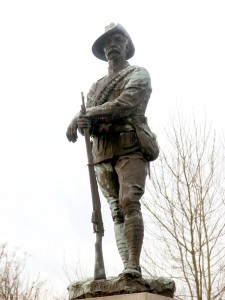 In 1905, Creswick’s bronze memorial to those who gave their lives in the South African War 1899-1902 was erected in Greenhead Park, Huddersfield. The memorial was paid for by public subscription and unveiled by Lieut. Gen. Sir J.D.P. French KCB. KCMG on Saturday May 20th.  This memorial seems imbued with the poignancy with which Creswick seemed to endow all his war memorial works.  The figure stands steadfast and contemplative: Creswick gives him the far-away look of a man who is inwardly seeing his lost comrades in arms (1). 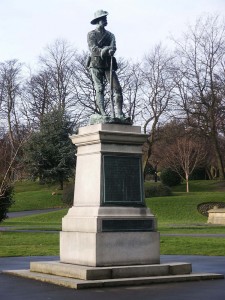 [Left and below left, Huddersfield Memorial to the Fallen in The South African War 1899-1902. Photographs © Martin Jenkins MA] 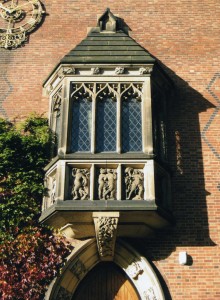 In that year, Creswick worked on carving the stone decoration for some of the buildings in the new Bournville Village that the Quaker family of Cadbury were having built.  The architect was William Alexander Harvey who had been at the Birmingham Municipal School of Art and had met Creswick at that time. This may account for Creswick’s commission.  On the facade of the Bournville Junior School are five decorative panels entitled Dancers, of which Noszlopy says:

‘Creswick exploited the hardness of stone to produce a concentration of finely incised details, notably in the folds of the drapery.  These encrusted details help the figures to stand out, contrasted against insignificant plain backgrounds and emphasise their full-bodied roundness which is characteristic of Renaissance sculpture and typical of Creswick’s style at this time.’ (2) 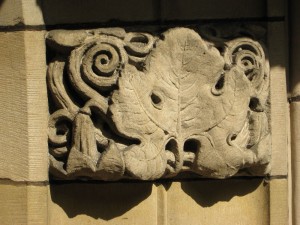 The vines, fruits and orchard foliage that Creswick sculpted are cultivated, which is appropriate for a school; they show the vigour of carefully tended growth and development.  The description in Public Sculpture sees the figures as Renaissance. Perhaps it might be qualified as the Northern Renaissance, despite the vines.  The dancers can be seen as more northern, the music they dance to could be Beethoven’s Pastoral, the celebration after the storm or the music could have been the sort that would have accompanied a Thomas Hardy scene at 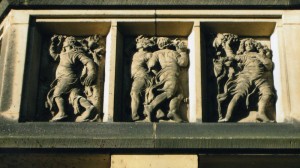 harvest home.  Creswick chose, as he often did, to clothe his figures in drapery of indeterminate vintage. This contributes to the timeless appeal of the figures, which are as vital and joyful today as when they were carved.  Creswick’s vines are strong and realistic. They are an example of a Ruskinian love of nature and its power to comfort the human spirit. Creswick’s own words bear witness to the Coniston days where he developed his appreciation of natural forms:

‘It is indispensable that our sculpture should possess for the dwellers of our large towns and cities some equivalent for the rural advantage and pleasures, they are in large measure deprived  of by virtue of the conditions under which they live.’ (3)

Bournville was a village for the workers in the chocolate factory of the Cadbury family, where workers were better housed and looked after than many in those times. The village also forms the beginning of the urbanisation of the area; growth that was gradually swallowing up the rural surroundings of Birmingham.  Today Creswick’s sculpture does indeed remind city dwellers of the countryside that they have to travel further and further to find.

There are four entries in Mapping Sculpture’s website in the  list of works  dated 1905, which may have been exhibited at the Midlands Art Circle as there are no other exhibitions listed in that year. However, there seems no catalogue list. There are two model designs and works called The Breadwinner and Little Help Mate.  Although Creswick’s exhibiting and commissions seems to have reduced at this time, later works indicate that he was still a flourishing sculptor (4).

‘There are signs of the decline of the popularity of Arts and Crafts work’.

There was criticism of the standards of some of the craft work. The Arts and Crafts movement was coming to the close of its high popularity and the public were becoming to accept the

‘The arts and Crafts Movement was going out of fashion’ (5)

In 1906, Creswick became the subject of complaints from the local branch of the Wood Carvers, Modellers and Stone Carvers Union. The union members claimed that he was

‘taking commissions in direct competition with their members,’

which was probably true. It must be the case that if the Arts and Crafts Movement was going out of fashion, the competition within the craft organisations for commissions would have increased.  Creswick was, however, supported by the Art Schools Policy Committee (6) who felt that:

‘It was highly desirable that the teachers employed should actually practise the arts and crafts they teach in the school.’ 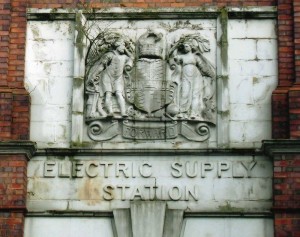 In 1906-7, Creswick created another Birmingham Coat of Arms [left], this time in ‘hard pale grey stone’ (Public Sculpture).  The piece is described as being,

‘restricted by the somewhat plain squat elevation of the building, an electricity supply station in Upper Trinity Street, Bordesley, Birmingham.  The sharpness of the details shows stylistic similarities with other coats of arms by Creswick notably the sinuous lines of the contraposto supporters and the leafy floral decoration’.

It is owned by the Midlands Electricity Board (7).

Here the records become less detailed once more.  There is, according to Mapping Sculpture, a record of Creswick having organised an Exhibition of Sculptures for the Midlands Arts Club in1908. He had been a tutor there since 1891 and continued to give modelling demonstrations to members until 1926.   Creswick exhibited at the Royal Birmingham Society of Arts, spring exhibition in 1908 a figure entitled ‘The Old Potter, a relic of the past’ which he susequently exhibited in 1909 at the Royal Academy Summer exhibition.  In 1909. He showed a work  entitled ‘Hush- a- bye Baby, on the tree top’ in the eighty-second  autumn exhibition of the Birmingham Royal Society of Arts. (8)

(1) I am indebted to Mr Martin Jenkins M.A. for drawing my attention to this memorial and for his photographs.

(3) Creswick 1891, Transactions of the national Association for the Advancement of Art and its Application to Industry .pp. 215-218.