In 1894-5, Creswick had another commission for a frieze (1). The detail of this commission has been a puzzle for many years as the frieze was described in The Birmingham Magazine as being on an architect’s office in Northampton with no clue as to its exact location. However, the advent of Google images has meant that the work has been identified as being in Nottingham on the facade of 15 George Street which was the building of Watson Fothergill 1841-1928. The building was designed by Fothergill and has four decorative panels by Creswick, one in terra cotta, a copy of which seems to have been exhibited on its own as ‘The building of the Parthenon’ in 1897 (2). Interestingly, it is listed as Presumed in the Mapping Sculpture website.  The other three panels are in buff terra cotta and show medieval builders working in wood and stone and a scene from the tudor era , photographs are available in the News section and are were taken on a a recent research trip to the Midlands 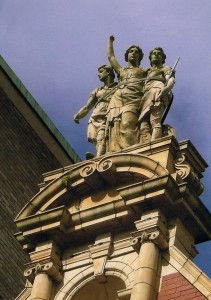 In 1896 Creswick provided decoration for the facade of a double fronted building which provided premises for two companies, Dean’s house furnishing and Pitman’s Birmingham Vegetarian Hotel and Restaurant. (3)

[Images, left. Top, Allegorical figures, a sculptural group above the gable of the Dean and Pitman building, 160cm, terracotta; Second image below, Carpenters depicted building the furniture for Pitman Furnishers; Third image below, Dining room of the Dean Hotel and Vegetarian Restaurant.]

Having established himself at the Birmingham Municipal School of Art, Creswick started working on commissions on a larger scale. Dated 1896,  the facade of 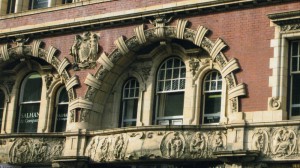 The Dean and Pitman building numbers 153-161 Corporation Street this saw him return to the large scale themes of working men from his time in London. Creswick’s design depicted the occupations going on within the building: A.R. Dean house furnishers and Pitman’s Birmingham Vegetarian Hotel and Restaurant.  Crowning the building is an allegorical group of three figures that was probably placed in situ when the building was completed in 1897. This has 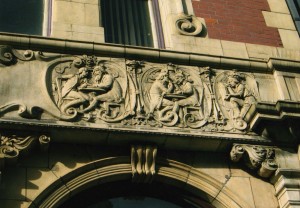 suffered somewhat from the wear and tear of time and has bits missing. It is now held together with an iron band. The three figures represent Birmingham. The central figure holds aloft an object (now missing) the hand perhaps held a torch. On the left of the central figure is a female figure representing the industrial arts of Birmingham.  She holds a distaff and a spinning wheel can be seen behind her. On the right of the central figure is a male figure that looks similar to the allegorical figure of Industry on the coat of arms on the facade of the building.  He may have been holding a hammer but that too is broken off.  There is also a string course which in Public Sculpture is described as

‘Wittily modelled as a length of rope held at either end by two putti.’

The frieze is in Creswick’s truthful style and the grouping of the figures is contained by some ‘elaborately attenuated and voluted scroll work’ which while being a contrast with the figures can be said in its detail of griffin like heads and grotesque masks to have a robust nature which speaks of Creswick’s individualism. (Public Sculpture of Birmingham 1998). 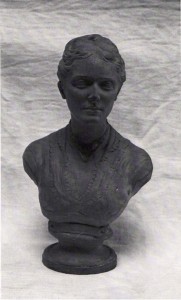 [Left: Bust of Mary Creswick, recorded in the Glasgow University Mapping Sculpture Survey as being exhibited in 1897. There are two of these busts owned by different branches of the Creswick family (4)]

Creswick’s career as a teacher continues to be important in his life (5).  Writing to E Preston Hytch at the Department of Science and Art, in June of 1897 Creswick gives an important insight of his methods:

‘My real work consists in teaching my students to perceive what they are looking at, to understand what the qualities possessed consist of, to arouse that admiration for those qualities which will alone enable them to understand them.’

Those words echo Ruskin’s in the Inaugural address he gave in Cambridge in 1858 and the Arts and Crafts principle of truth to material (6).

From the Minutes of the Municipal School of Art written by Wainwright in February 1898, it is plain that however engaged Creswick was in private commissions he did not neglect his students (7). Among the reports of the examiners on the students annual exhibitions, it is reported that,

‘The modelling from the figure attains as a class, the highest point yet reached.  No group of works from the life has shown such artistic quality as is to be found in the models of recumbent figures: they are all distinguished for feeling style and artistic skill.’

Wainwright continues to write of the modelled designs:

‘The work is very varied, but uniformly good; the designs for carved panels and moulded or pressed tiles exceptionally so. Throughout the section the handling is commendably in sympathy with the material and the scale of work to be treated; in this respect it exhibits an excellence not before so generally attained.’

Minutes of the Birmingham Municipal School of Art

These reports on Creswick’s students work are, it is reasonable to suppose, a tribute both to Creswick who had not taught before he came to Birmingham and to his teacher John Ruskin who so inspired his student that the flame he kindled was still burning brightly after two decades had passed. 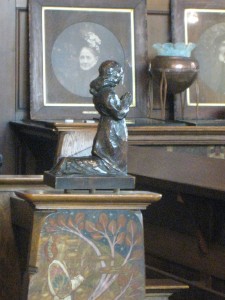 In 1899, The Bromsgrove Guild gained a major decorative commission for the Wallasey Memorial Unitarian Church (8).  This was a collaborative project involving Creswick and his colleagues.  Walter Gilbert, the founder of the Guild, contributed the delicate electroliers and coppered-bronze decoration on the lecturn and Bernard Sleigh painted panels on the end of the choir-stalls, communion table and pulpit.  The reredos is in Della Robbia ware designed by Harold Rathbone in Birkenhead. Harold’s brother, Edmund, with Edmund Ware had designed the church.  Allan Crawford in his book By Hammer and Hand relates that:

‘The Rathbones were a Liverpool family who were philanthropic merchants and holders of many public offices. They were the Liverpool representatives of the Century Guild and it was through the 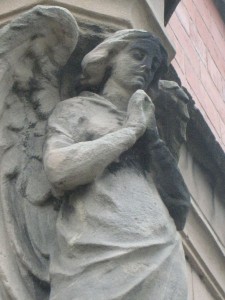 mediation of Benjamin Creswick that the Bromsgrove Guild got the commission for the Church.  Edmund Rathbone later commissioned the Guild’s contribution to the Sefton House refurbishment in 1901.  Walter Gilbert who was an active searcher for commissions seems to have benefitted from Creswick’s London connections and had made a wise choice in including his former teacher with the Bromsgrove Guild (9).’

Creswick’s contribution to the Unitarian Church decorative scheme was stonework on the exterior of the church, which comprises decorative capitals for the seven pillars and four allegorical figures for the four pillars supporting the octagonal tower, representing meditation, eloquence, devotion and music. The columns inside the church are also by Creswick as are the two small figures on 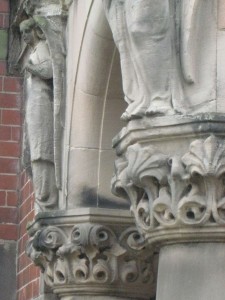 the choir-stall ends, which he carved in wood.  This Church is now in the care of the Historic Chapels Trust which has maintained it in excellent condition. The Church is a most beautiful example of the Arts and Crafts Movements collaborative schemes.

Once again I have to say how indebted I am to Crawford’s, By Hammer and Hand. 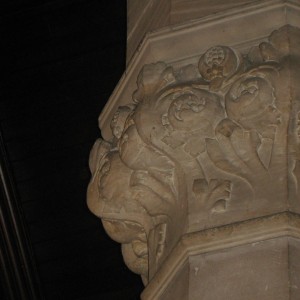