This section is informed by Alan Crawford’s By Hammer and Hand, the Arts and Crafts Movement in Birmingham, the helpful notes on the B.I.A.D. archive of the Birmingham Municipal School of Art, Simon Ogden’s indispensible work and Quintin Watt’s The 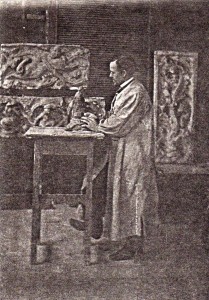 Throughout this time, a number of the teaching staff at the School of Art – among them many talented crafts people  - became fired with the ideal of the Arts and Crafts Movement: ideals  that were, in turn, based on the medieval guild concept of ‘art as unity’. The idea was to encourage unity between artists & their fellow craftsmen – the High Arts and so-called Lower Crafts.  Increasing numbers of women were becoming involved, particularly in the revived needlework classes but also working in all disciplines.  They would have been among the staff who taught in the in the unique Art Laboratories that opened in 1893. As Frank Brangwyn points out, Creswick was instrumental in the conception of this extension of the Municipal School of Art. He had aided the Headmaster in bringing the ‘laboratories into being’ to broaden the scope for practical metalwork and the modelling classes that Creswick taught, among other subjects (1).

The staff, many of whom were productive craftspeople in their own right, and later their trained pupils, soon combined to create groups such as The Birmingham Group, the Birmingham Guild of Handicraft, the Bromsgrove Guild and the Ruskin Pottery, all of which supplied the growing market for craftwork and interior design (2).

Throughout these years, some of those who had been Creswick’s first students were to have a close connection with the Bromsgrove Guild, another guild in which Creswick was to flourish.  Indeed, it was Walter Gilbert, a former pupil of his, who would become the leading light in the guild, together with his former teacher (3). Creswick’s Century Guild experience would have been helpful in the formation of the Bromsgrove Guild, an event that did not happen until 1898 (4).

Listed among Creswick’s institutional and professional connections in Mapping the Practice and Profession of Sculpture in Britain & Ireland 1851-1951 is his role as Tutor at the Midlands Art Club 1891-1926 where he gave modelling demonstrations to members (5).

Creswick is listed in the membership of The Arts and Crafts Exhibition Society from 1894-1899, albeit that the entry is marked as presumed. However, it is certain that in 1893, Creswick’s students were exhibiting with the Society (6). The Arts and Crafts Exhibition Committee was composed of the luminaries of the art world: William Morris, Frederick Leighton, Alma Tadema, Burne-Jones, Holman Hunt, Walter Crane, W.B. Richmond and Ford Maddox Brown (7).  Thirty works by the School’s pupils were approved by the Committee, but it is not noted how many of them were by Creswick’s pupils.

There is evidence of Creswick’s membership of the Birmingham Art Circle. In 1891, Creswick was proposed, but he did not gain enough votes. However, he was nominated again in 1892 and elected, presumably because he was better known by then. Creswick was elected to the Art Circle for the year beginning January 1893.

Creswick was also listed in the Royal Birmingham Society of Artists as ‘Professor of Sculpture from 1894-1926’.  He is listed for the years 1892-1894 with many entries in the exhibitions of the arts societies of which he was a member. These are detailed in Mapping the Practice and Profession of Sculpture in Britain and Ireland 1851-1951. There are signatures in the members book for 1891 and 1914 however the information about his membership and association with the R.B.S.A. is being updated at the moment and will soon be available in a more extensive form  (8).

The private commissions from this time are detailed in Public Sculpture of Birmingham (9).    In 1890, Creswick created for a boot and shoe manufacturer at 83 Albert Street, Birmingham, a work entitled the Elves and the Shoemaker, depicting the story from the famous Grimm’s fairy tale. Unfortunately the building was demolished in 1985 and the work is sadly lost it is possible that permission to use an existing image may be obtained .  There was also in that year a commission for the Bromsgrove Guild, which Walter Gilbert secured. The commission, which was for Sefton House in Liverpool, was to undertake the refurbishment of the home of Dashper Glynn, a shipping magnate. The Guild provided paintings by Henry Payne and there were decorations by a team of Guild craftsmen, Creswick made decorations for a fireplace in a drawing room, these depict the story of the water spirit Undine. The design features carvings in wood and a repousse metal panel (10). 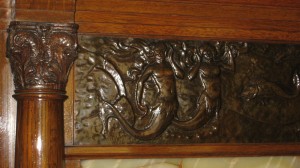 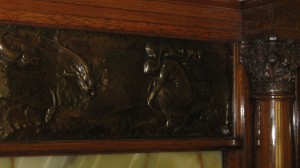 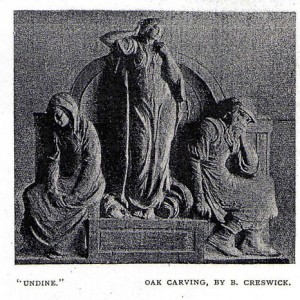 Undine, 1900, part of the interior decorations for Sefton House undertaken by the Bromsgrove Guild. From Birmingham Magazine 1903] 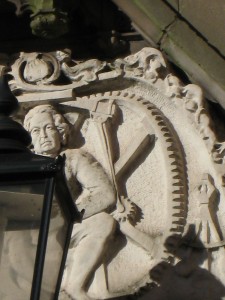 1891 saw Creswick gain a commission for the Handsworth Central Library, Birmingham. The design is a narrative in two panels depicting a story about James Watt’s and Mathew Boulton’s steam engine.  [Images left and three further images below left.] These works can be seen as illustrative of Creswick’s intention to put into practice what he endorsed in his 1890 lecture published in the Transactions of the National Association of Art and its Application to Industry of 1891 and in references Creswick made in interviews and reviews.  He was trying to convey the following, especially to his students: and those commissioning sculpture for public buildings: 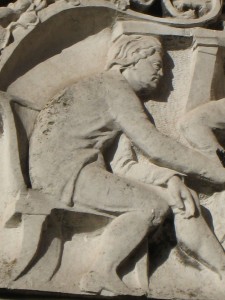 means of training them unconsciously and without effort… I believe it is impossible to over-estimate the effect of a systematic application of sculpture to our architecture, dealing with subjects that would make our people familiar with all the events of English history our achievements by land and sea especially if done by members of the profession of acknowledged ability.  Such a system would form a powerful aid to the work of our art galleries, museums and schools of art.” (11)

A prime example of this effect is seen in Creswick’s 1891 panels for the Handsworth Library.  These two panels illustrated in the Public Sculpture of Birmingham, are descriptive of the trials and tribulations of James Watt and Mathew Boulton local heroes of the Handsworth Soho district where their Soho foundry formed the cradle of the industrial revolution.  The relief panel over the window shows Watt and Boulton, surrounded by models and instruments. It is said that they are discussing the feasibility of applying rotary motion to the steam engine.  In the 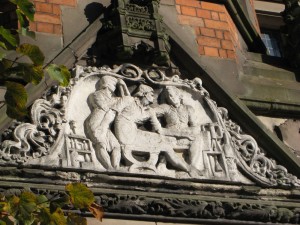 background is Dick Cartwright who overheard the two men and gave their secret away.  This was discovered when Watt attempted to patent the invention, he discovered that someone else had beaten him to it.  The other panel over the door to the library s depicts Watt showing his companion Dr Robinson a model of his steam engine.   Watt and Boulton were the sort of people who local inhabitants would have known about. Perhaps parents would have told their children the significance of these decorative panels. Even today, it should be possible to hold sessions in the local library for children and make the story interesting to them. After all, industrial espionage and steam engines make a good mixture.  Creswick 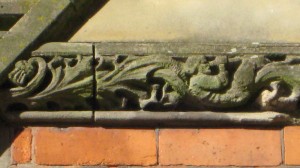 worked foliage into the decorative bands below the panels together with little figures toiling away. It is probable that these figures depict the miners who provided the coal for all the engines.  Toiling below the ground, the miners are being likened to the roots of the foliage that provide fuel for surface growth and expansion. 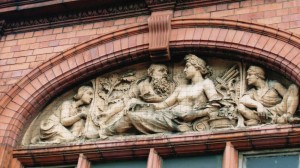 In 1890, the Bloomsbury Library had commissioned panels for the main facade of the building. They show various aspects of work both industrial and rural, also leisure pursuits, football, lacrosse and reading with scenes of domesticity from childhood to old age. The main panel shows allegorical figures of Arts, Crafts and Industry presenting their wares to Birmingham. We see a semi-nude figure classically draped semi reclining in the centre 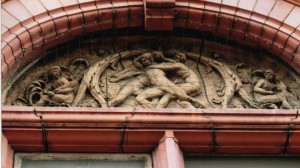 with a male figure – Art – behind her drawing her attention to the work of a young woman – Crafts – to the left who is offering textile or embroidery while another male figure – Industry – to the right sits among an incongruous collection of ‘armaments’ which of course for Birmingham were an important industry. The arts have an oak branch in their midst and Birmingham holds a mural crown and a laurel branch.  These represent perhaps all of the 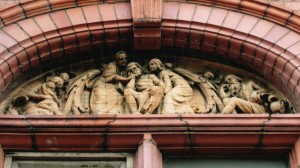 subjects dear to the heart of the sculptor, with the possible exception of the armaments.  This building had the foundation stone laid in 1891 and was opened in1893 Public Sculpture of Birmingham (1998)

[Left and above,  Bloomsbury Library]

It is possible to trace the thread of Ruskin’s influence throughout Creswick’s life, firstly through the clarity and truthfulness of his work and his 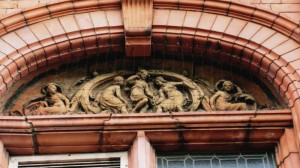 commitment to his choice of subject whenever he could get a suitable commission.  This was confirmed by the many Ruskinite patrons who commissioned his work and the many Ruskin inspired artists and craftsmen with whom Creswick collaborated in particular a student of Creswick’s who later become the accepted founder of the Bromsgrove Guild, and can be seen as underlining the enduring nature of Ruskin’s influence on Creswick.   Phillip Medhurst in his 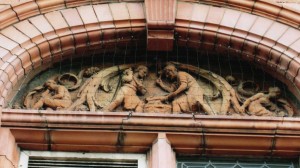 Main Inventory of Gilbert’s work quotes a promotional booklet probably written by Gilbert in 1938. It states that he was:

‘A pupil of Benjamin Creswick who was Ruskin’s favourite pupil trained by him in sculpture to be the Professor of his School of Sculpture at Keswick.’

The foundation of Ruskin’s teaching, which in turn has become the foundation of Gilbert’s was to study the work of old artists, try to probe the secrets of their minds and find the way they fitted their work to its surroundings and the story they desired to tell (12).

Creswick also exhibited in 1891 a statuette, The Young Footballer, in this year, at the Royal Academy’s summer exhibition (13). 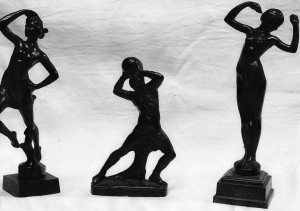 [Left: Statuettes, including The Young Footballer]

Creswick was commissioned by the West Bromwich Town Council in 1892 to create a life size portrait bust in marble of Samuel Lees, a member of a local family iron-working business in the town and a public benefactor. This bust now stands in the Central Library, West Bromwich (14).

At the Birmingham Society of Arts sixty-seventh Autumn Exhibition, in 1893, Benjamin exhibited a statuette entitled A Clever Pass, which was one of a number of statuettes and trophies of footballers that Creswick sculpted. His entry was listed as ‘multiple works’.  Sadly, the entries for autumn 1894 and spring 1895 are also similarly uninformative (15).

p.158 Elves and the shoemaker

(12) Medhurst 2010 www.scribd.com/doc/17256374/Walter-Gilbert-Main-Inventory Mr James Dearden was kind enough to examine the reference to the Ruskin School at Keswick and has found no other references to it, possibly it might have been a misunderstanding.