There is a reference in The Works to Creswick being among the ‘young artists’ who stayed with Ruskin at his home, Brantwood. There is no date for this reference but it is in the introduction, covering the period 1878-1882 (1). The fact that Ruskin ‘took pleasure in giving them [the young artists] encouragement’ continues to place Creswick within the circle of Ruskin’s Brantwood life.  There are also, in the visitors’ book of the St George’s Museum for September 1880, ‘multiple entries for Benjamin Creswick’ (2). These seem to indicate a sustained period of time spent studying at Brantwood and in Sheffield interspersed with work on commissions when Creswick could find them, or those found for him by Ruskin.  This period in Benjamin’s life is less documented, however. In 1881, the extended Creswick family appear in the census at 120 Bell Hagg Road, Nether Hallam, Yorkshire, just a stone’s throw from Ruskin’s St George’s Museum. In this tiny house, Benjamin and his wife and four children were living together with his parents and unmarried brother Charles who were staying with them, possibly as ‘visitors’ as this word was originally written on the census form but was later crossed out, as the relationship to Benjamin, recorded as head of the household, needed to be given.  His occupation on the census form states that he was a sculptor.  Perhaps the expanding family’s’ fortunes might have been less stable, which would account for the overcrowded house; some of them could have been out of work, or Benjamin was possibly making his own way. There is no written evidence, as yet discovered, of when Ruskin ceased his full support of the family. 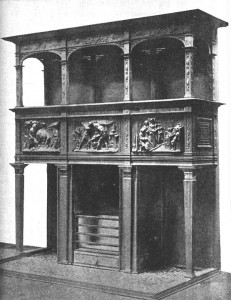 During the early 1880s, Creswick, is described in a biographical entry in Public Sculpture in Birmingham (3) as having been sponsored by Ruskin who introduced him to Arthur Heygate Mackmurdo, English architect, social reformer and designer. Mackmurdo was founder of the Century Guild in 1882.  The Studio (4) illustrates a fireplace designed by Mackmurdo with panels sculpted by Benjamin Creswick dated 1880.  This group was one of the seminal influences of the Arts and Crafts movement.  Creswick was working among men such as Selwyn Image who designed the title page for the Hobby Horse the journal of the Guild, Herbert Horne textile designer and Clement Heaton metalworker. He was also involved with collaborative projects and no doubt meeting the other great leader of the Arts and Crafts Movement, William Morris.  The Sheffield-based Ruskin & Creswick researcher, Simon Ogden describes the ‘set’ as including Whistler, W B Yeats and Oscar Wilde.  Creswick’s studio was in Newman Street, Camden, London, a few streets from Mackmurdo’s commune (5). The artist, Frank Brangwyn visited him in this studio where he admired Creswick’s huge Statue of Humanity for the Positivist Church (6). These visits are believed to have been in the early 1880s.

It is known that Mackmurdo went to Oxford where he met Ruskin. There are also unsubstantiated references to 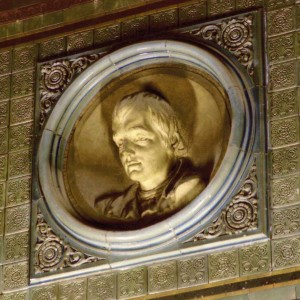 Creswick having been there, although when and why is not yet clarified. That said, there is an undated letter from Ruskin on Oxford’s Corpus Christi College’s headed notepaper arranging a meeting with Creswick:

‘Yes Monday next will do delightfully for me and in a week I hope to be able to put you in quite safe ways of study.’ 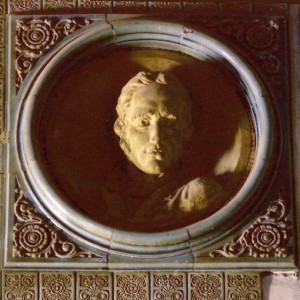 The above letter (7) seems to indicate the possibility that there was at least a short visit.

Between 1878 and 1884, the Central Library building in Leeds was being built (8).  Creswick produced a number of portrait roundels for it.  No definite date for the commission has yet been found in the remaining records. 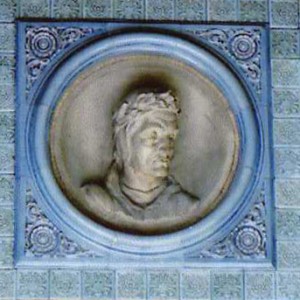 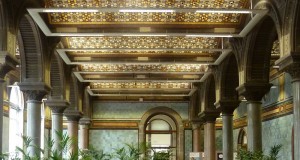 An entry in The Years Art for 1884 gave Creswick’s address as 30, Newman St, Camden, and information that he exhibited at the Walker Gallery in Liverpool.  He also exhibited there in 1886 with a Liverpool address, 259 Caynean St (9).  The births of his fifth and sixth children were in the London area, which indicates that Creswick was moving around the country with his family quite frequently 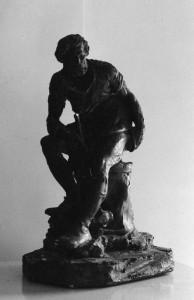 at this time.  The Creswick’s son Charles was born in Enfield, Essex in about 1883.  The Creswick’s next child, a daughter Mary Ellen, was born in Walthamstow in about 1885.  William Morris & his family were known to have lived in Walthamstow, although at an earlier date. There are in the collection in the William Morris Gallery in Walthamstow, three works by Creswick: a bust of A.H. Mackmurdo dated 1892, a tobacco jar illustrating the passing of the 1884 Reform Act and a figurine, The Blacksmith dated 1900. (10)

Also Informative about the Century Guild generally, and available on the Victorian Web www.victorianweb.org

(10) The Walthamstow Museum www.wmgallery.org.uk  The Three objects known to be in the collection are not presently on show but the details and some images will be available soon