In September, there is another report in the Sheffield Independent about Creswick’s work.  This time, surprisingly, it was for stone carving on the newly-opened extension to the Hallamshire Bank in Church Street, Sheffield (1). It remains a mystery, how and where Creswick found time to learn this skill alongside his work and the sculpture classes he attended, but he had obviously acquired considerable skill as the report stated that:

‘The whole of the carving including the Ionic capitals on the front of the building and the coat of arms above the parapet has been executed by Benjamin Creswick, a young grinder of this town, who is now under the fostering of Mr Ruskin.’ 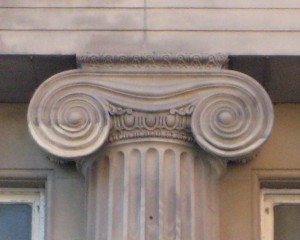 This building is still standing and although there is little record of Creswick’s training, the stonework is clearly that of an experienced craftsman.  Interestingly, the architect for this extension to the building was Mr H.D. Lomas who it seems had continued to be interested in Creswick’s career and through whom it is likely that Creswick would have been given the work.  These 1870s reports are the beginning of more public interest being shown in Creswick the sculptor. This is partly attributable to his being under the fostering patronage of Mr Ruskin. That said, the first review in 1876 was of Creswick’s work done on its own merit, but the interest of the press and, no doubt, those in the artistic circles of Sheffield 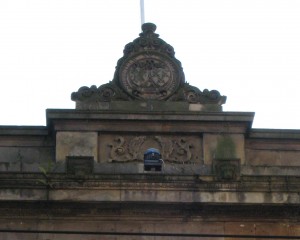 would have increased as soon as the illustrious name of Ruskin was connected to Creswick’s progress.

There followed a period where Ruskin was clearly a teacher, patron and friend of Creswick.  On 14th November 1878 Ruskin in a letter to his protégé wrote:

‘It is because I have more to say to you than any other of my friends that I can’t begin saying anything and put off from day to day even telling you how truly I rejoice in your success how grieved I am that I have so far failed to contribute to it.’ (2)

Ruskin did, however, contribute most generously with personal tutoring, monetary support and by seeking patronage for Creswick.  He supported not only Creswick but his whole family by giving a monthly payment of seven pounds (3).  This would have been the wage of a skilled craftsman at the time and Ruskin was reported to have continued this for ‘four or five years’.  However it cannot be said that it was a trouble-free relationship; there were difficulties.  There were exasperated letters from Ruskin to Creswick about his overspending and ‘buying marble’ and ‘building studios’ and that he must learn to stand on his own feet. (4)  Nevertheless, his patron persevered and the friendship survived. Ruskin continued to write with affection and in April 1888 (5) they were still communicating, long after Ruskin’s close supervision of Creswick’s work had ceased.

Creswick meanwhile continued to be based in Sheffield. He also spent time in Coniston, in the Lake District, and through Ruskin’s efforts on his behalf was employed in Bewdley by George Baker, a prominent Birmingham businessman, who had become a devotee of Ruskin. Baker became a member of Ruskin’s Guild of St George and made large donations of land to it.  On 29th August 1878, Ruskin wrote to Baker:

‘I am most grateful to you for all things; most chiefly of late for employing Creswick, who has the truest genius, though it will take time to develop in the direction of beauty.  But St George and you could not do greater kindness in fostering it.’ (6)

For some time, Creswick worked in Bewdley, Worcestershire. His wife was there when their third son, Benjamin, was born.  Ruskin wrote in May 1879:

I have determined to fetch you all to Coniston and have you near me at all events for some weeks in order to put you on your road in work and thought… I think the lodgings will be ready.  You have two children I think? I hope the air will be good for them and your wife as [there are] May Shropshire breezes – and the flowers are just waiting to be modelled.  Have you the money to come?