1876 is the first year in which there was a record of Benjamin Creswick’s attempts to leave his life as a knife grinder behind him.  The Sheffield and Rotherham Independent of 25th May (1), in its report of The Sheffield Society of Arts second exhibition on the section for medallion portraits says

‘Mr Benjamin Creswick, a grinder, manifests a great deal of rough talent in several medallion portraits, which by no means disgrace the exhibition.’

There are further details about the progress of Creswick from knife grinder to sculptor given in a retrospective article in The British Architect, of 1887, by T. Raffles Davison, 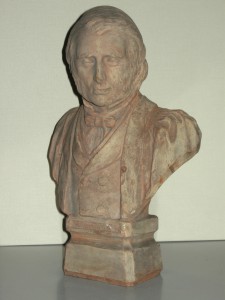 an architect and editor of the magazine, reporting that while Creswick had been employed as a knife grinder there were growing problems with his health.  Raffles Davison, clearly an admirer of Creswick’s work, seems to be a reliable reporter, whenever the facts can be cross-referenced.  He described a consultation Creswick had with a Dr Balbirnie whose advice was to give up the life-threatening knife grinding. When the doctor asked whether his patient had any other means of making a living, Creswick explained that he had been making efforts to change his occupation. He had been ‘having instruction by Mr Read Turner (2) a Sheffield artist, also being given ‘practical help’ by Mr H. Lomas a local architect, who generously put his library of art works at his disposal’.  Raffles Davison records in this article the first specific link to the all important Walkley Museum (3). Creswick said he had been inspired by the drawing and modelling displayed there.  Then as an example of his work Creswick ‘produced from his pocket a small portrait model of Dante’. This so impressed the doctor that he commissioned a portrait bust of himself.  There are no dates in this article, only the information that, ‘about this time Mr Creswick modelled a bust of Mr Ruskin from a photograph in the museum’ 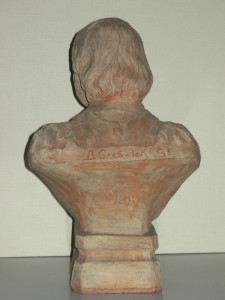 There are also corroborative records of this in Ruskin’s diaries, in subsequent newspaper articles and in the Walkley museum records.  ‘A bust of Ruskin by Mr Creswick was shown in June 1877 at the Sheffield Society of Arts exhibition along with four busts of other local worthies copies of the busts were offered for sale at three guineas each’. (Dearden 1999) This reference was to the bust modelled from a photograph.

[Left: Ruskin back (back view of bust with date and signature) this bust is dated 1889 and will be a cast from one of the early originals. By permission of Museums Sheffield (Louise Pullen curator Ruskin Collection]

‘A bust of Ruskin by Mr Creswick was shown in June 1877 at the Sheffield Society of Arts exhibition along with four busts of other local worthies copies of the busts were offered for sale at three guineas each’. (4)

This reference was to the bust modelled from a photograph. Raffles Davison reports that in August through the urging of Henry Swan, Ruskin – who had been shown a photograph of the original bust – had written to Swan,

‘That it was the best portrait of himself he had ever seen, that the author was undoubtedly a true artist and should one day be a great man.’ (5)

Ruskin then agreed to sit for a portrait bust which was said by Raffles Davison to be the first bust of Ruskin from life.  It was well received not least by Ruskin himself, ‘who declaring it while it was still in progress, unsurpassed in modern sculpture, except by Thorwaldsen’ (6)

That this was a very difficult period in Ruskin’s life is widely recorded and it is proof of his true belief in the good to come from helping the working man to lead a better and happier life through education and the fulfilment of his artistic potential that, he accepted Creswick as a pupil, despite the poignant diary entry of September 14th 1877  (7)

‘Worked hard all day on Anagallis and Mr Gale’s paper for Fors, and had the Sculptor from Sheffield, but sadly tired for want of any sort of rest all day, for I was thinking of him as a problem all the time he worked.’

Nevertheless, Ruskin’s entry for the following day shows again the practical nature of his approach as he ‘saw help given to Sheffield Mr Creswick’ (8).

In 1878, Creswick’s second bust of Ruskin -the life portrait – was exhibited again, with copies for sale for one guinea (9). Ruskin was so much of an iconic figure and busts of famous men were a popular addition to the middle class Victorian home that these sales would have been a valuable source of income for Creswick.

(2) Mr Read Turner 1843c-1900 Artist and art teacher a member of the First West York Engineer Volunteers founded at the Sheffield School of Art 1860, he taught Creswick when he joined and attended the art classes which they ran. (From an undated and un-attributed newspaper cutting in the Sheffield Local History Library, cuttings collection this is being further researched)

(5) T. Raffles Davison in The Sheffield and Rotherham independent 4th May 1887 syndicated from The British Architect. The copies I have of these do not give the date of the original article.